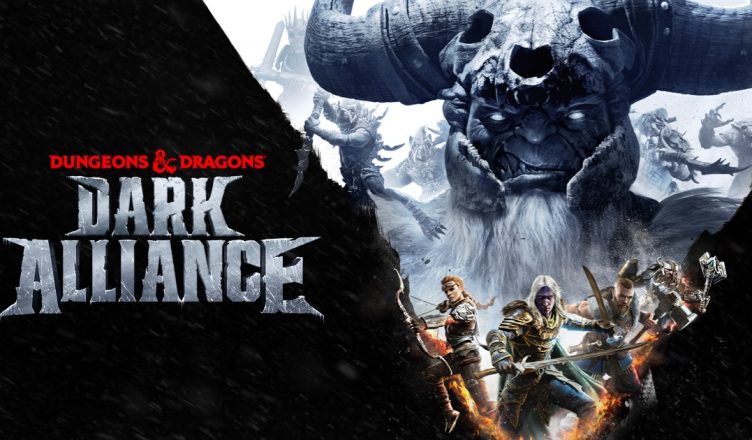 “Violence The forms of violence experienced within Dark Alliance include: Hearing grunts and groans while in battle and taking damage. In-game, non-interactive environmental elements including dwarves and goblins impaled on stakes and creature corpses in armor or depicted as bones with weapons or arrows in them. CGI cutscenes including mythical enemy creatures catching fire and burning, enemy creatures dismembering other enemy creatures, and enemy creatures using “magic” to knock other enemy creatures down incapacitating them. Blood and Gore Player characters and non-player characters show brief puffs of blood in various colors to depict to the player when damage has been done. There are in-game and CGI cutscenes of non-player character creature corpses hung up and gutted elk. Language There is use of offensive, rough, impolite, profane language, that can be heard, seen and read (including relatively mild terms such as “damn” and “hell”).”

TheThe first trailer for Dungeons & Dragons: Dark Alliance is dark and haphazard, ridden with nauseating visuals set to post-hardcore metal that tries to sell a perceived coolness to a franchise associated with a tabletop scenario. It felt like a show of desperation, an attempt to prove something to an untapped player base. But that trailer couldn’t be any more misleading. Instead, Dark Alliance tapped directly into the comforting nostalgia of sitting on the floor of my bedroom as a child, bending the spine of the novel that would be one of my first exposures to Western fantasy and everything the genre would behold.

Dungeons & Dragons: Dark Alliance attempts to adapt one of the most seminal novels in The Forgotten Realms campaign setting: The Crystal Shard. It is a predictable tale of heroics set in a now-generic fantasy setting, the first in a trilogy that would popularize The Forgotten Realms among a broader audience in the late 1980s. Dungeons & Dragons: Dark Alliance also pulls from the other two novels in the Icewind Dale Trilogy to create a more tongue-in-cheek narrative that, at times, feels more lighthearted than the books from which it draws inspiration.

Unfortunately, Dark Alliance does also reflect the somewhat middling quality of the novel, even as the game attempts to entice a new generation to a sliver of what consists of Wizard of the Coast’s wide array of IPs and transmedia material. Dungeons & Dragons: Dark Alliance isn’t necessarily a bad game, but it doesn’t differentiate itself from other action-oriented live service games, offering a fantasy skin that feels generic some 33 years after the release of the novel.

Yet I loved seeing The Crystal Shard’s hero Drizzt Do’Urden and his companions in action and living through small fragments of the story that I had read. Dungeons & Dragons: Dark Alliance is a kind of wish fulfillment in that way.

Combat design for each of the currently available roster of four characters feels unique, with each bringing their own distinct play styles into the fold. I immediately selected Drizzt Do’Urden, perhaps one of the most recognizable faces within the The Forgotten Realms universe. He’s fast, requiring finesse. His health is low and his play style is reliant on using quick combos, staggering enemies, and relying on invincibility frames to keep yourself alive, especially when playing on your own.

I also spent some time playing as the other three characters. Bruenor Battlehammer, the proud King of Mythril Hall, is sturdy; he can take plenty of hits before succumbing to defeat. He also has a neat skill that empowers the weapons of those around him, imbuing them with fire enchantment. Then there’s Wulfgar, whose skillset is fairly straightforward. He can deal immense amounts of damage, and he’s great for really doing just that. Wulfgar and Drizzt are the primary damage dealers of the group, but although Wulfgar is also a sturdier character, I ended up spending much less time with him in favor of the Drow. Wulfgar feels like a character made for those inexperienced with action titles, as he simply swings his hammer down and eviscerates any enemies with ease.ANY AND ALL COMBINATIONS OF CHARACTERS WORK WELL TOGETHER

Lastly, there’s Cattie-Brie, a skilled archer and the adopted daughter of Bruenor. She has a healing skill that feels vital to endgame encounters. Her charged shot with her bow feels overpowered by comparison to the attacks of literally anyone else, but it eats up her total stamina bar as a cost. Unfortunately for Cattie-Brie, input lag is a very real issue if you are playing with a friend overseas. Countless times, the lag resulted in me performing a special melee-focused attack as opposed to simply notching an arrow in my bow and firing it off to save my friend.

Those who enjoyed The Crystal Shard and the other books in The Icewind Dale Trilogy would have visualized the fight with the powerful wizard Akar Kessel when they read the books; now, they can see it firsthand. However, Dark Alliance’s version may not be as grandiose as what you imagined. These ideas are arguably more enticing in the original books than what the game actually allows, which is a shame. (One notable exception is the long and sometimes arduous encounter with Icewind.)

Despite all of the skills I had unlocked as Drizzt, the enemy AI would rinse and repeat attacks without any real variety. What should have been battles of skill turned into spinning away from a telegraphed attack to lunge back in with my dual scimitars, over and over and over again, until victory was finally within my grasp.EVEN WITH THE GAME’S ISSUES, PLAYING WITH A FRIEND GREATLY ENRICHED MY EXPERIENCE

Sometimes animations feel floaty, and the lag when playing with a friend only makes this worse. I would sometimes float over the floor when performing combos, and despite there being a lock-on system, I found it more a hindrance than a help, as it would sporadically switch between targets at a whim, depending on how I would swivel my camera around to better view my surroundings. While a block and parry system are available, I rarely used either of these options when taking on enemies, since one hit would usually mean death. Hitboxes and animations for attacks sometimes felt inconsistent due to lag or the enemies themselves teleporting around the arenas.

Even with those issues, having the opportunity to play with a friend greatly enriched my experience with Dungeons & Dragons: Dark Alliance. We were treated to unique banter between characters that would change depending on the missions we would enter, with the characters sometimes commenting on the happenings of the realm at large when we would return to base. Any and all combinations of characters work well together, which was a relief. I was genuinely worried that one of us would be forced into the role of a healer to see it through to the end.

While higher difficulties are available and not dictated around the average power of the player, as you can jump into the highest difficulty of the available missions as soon as the game begins, engaging in them is not advised. Even throwing yourself into a mission with a power average just one tick above your own can sometimes lead to immense frustration, or hours spent on a map that might have otherwise taken 15 to 20 minutes. And while I generally don’t mind a challenge, the difficulty scaling felt unfair in a way, like a means to stretch the player’s time with the game.

Dark Alliance is a live service game, after all. Players are encouraged to grind areas for gear at their respective power levels, and then replay those levels for chances of obtaining Epic or Legendary gear, as items of this rarity tend to be the only gear that’s worth upgrading. Certain missions also have a higher chance to drop items from specific sets, which encourages more grinding on the part of players hoping to earn certain bonuses.THE DIFFICULTY SCALING FELT UNFAIR … LIKE A MEANS TO STRETCH THE PLAYER’S TIME

In missions, players have two options upon clearing set areas, which are to increase the rarity of loot that will drop, or to rest at camp, which will create a checkpoint for the player and restore any used healing items. On the Legendary and Ascended difficulty — the final two tiers of difficulty the game offers — I would spend most of these instances resting at camp to refill my resources, because enemies at this level, be they goblins or frenzied psionic cultists, would simply evaporate my health with a single strike. That was also a normal occurrence if my character’s power level did not meet the suggested requirement of the selected difficulty.